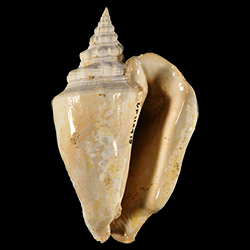 Shell of moderate size, with about nine whorls, of which two are small, smooth and nuclear; subsequent whorls spirally threaded and ribbed or tuberculate at the shoulder; spirals fine, variable, most threadlike on the early whorls, on the last whorl wavy and obsolete; early whorls transversely ribbed with 10-14 small, rounded riblets, which gradually become fewer and more nodulous until nothing but the nodules are left; on the first half of the last whorl the nodules are obsolete, on the second half there are three or four large nodules much larger than any others on the shell; behind the shoulder the shell is slightly excavated and the suture distinctly appressed and some times marginated by a few extra large spirals in front of it; in the vicinity of the last nodule the posterior edge of the last whorl is produced backward until it reaches the second or third whorl, counting backward; on the back of the last whorl are often a few feeble, elevated, irregular waves or obscure tubercles midway between the shoulder and the canal, recalling the stronger and more numerous waves in S. granulatus; aperture narrow, produced backward, squarish behind, with a groove at the commissure and an obscure subsutural ridge; outer lip in front of the angle nearly straight, smooth inside, or with a few faint granulations or lirations anteriorly; genital sulcus well marked; canal short, recurved; body with a wide and moderately thick coat of callus, but no lirae. Max. Ion. of shell 62.0: max. lat. 36.0 mm.

This fine species forms, in its characters, a sort of transition from S. albirupianus toward S. pugilis and S. granulatus of the recent fauna, being more like the latter than the former. It is also recalled by the S. Bonellii Brogn. of the European Miocene (Dax, Vienna Basin), which is a larger and less elegant species. S. Aldrichi cannot be regarded as a link in the ancestral chain of S. pugilis, since the latter was already in existence in the Haitian Miocene, but its relations to S. granulatus are closer. At all events, it combines characters which in recent species seem to be parted among several specific forms.

This species is very abundant in the Chipola beds, holding there much such a place as S. pugilis does at some points on the Floridian coast to-day. It varies very much as pugilis does, having varieties corresponding to var. alatus and other mutations of pugilis. The strength and to some extent the character of the spirals on the last whorl varies: sometimes we have two sets of coarser and finer wavy grooves, with wider, flattish interspaces; sometimes the fine grooves are obsolete and the sculpture is of wide, well-marked, rounded channels, with rounded, not much elevated ridges between them. The sculpture of the young, as might be expected, is more uniform, and the species is sufficiently characteristic to be easily recognized, even in its most extreme variations."