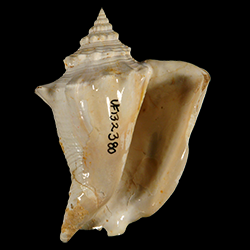 Shell with nine or ten whorls, of which about two are small, smooth and nuclear, the others ribbed, varicose, tuberculate and spirally sculptured; early whorls with twelve or more narrow, rounded ribs, gradually becoming angular, tuberculate, larger, and finally tubercles pure and simple, of which there are nine or ten on the shoulder of the last whorl, the last or penultimate being the most prominent of all; spiral sculpture of rounded threads, becoming gradually obsolete, and on the last whorl narrower and more distant than in S. Aldrichi in most cases, but varying much as in that species; spire variable in height, sometimes high and slender as in the silex-fossil figured, but generally much the same proportions as in S. Aldrichi; last whorl attenuated anteriorly; shoulder less excavated and less regular than in Aldrichi, usually with two more prominent threads in front of the somewhat appressed suture; outer lip widest behind, little ascending, not reaching the suture at the beginning of the last whorl; commissure deep, narrow, not grooved; there is nosubsutural ridge, but on the body behind are four or five lirae; outer lip angulated and widest at the shoulder, simple, a row of small, short lirae within it as in dwarf specimens of S. bituberculatus; pillar with a thin callus, sharply recurved in front with a distinct fasciole; canal narrow, much recurved, obliquely truncate; genital sulcus distinct; last whorl sometimes wavy on the back as in S. integer. Max. Ion. of adult shell 70.0; max. lat. 45.0 mm.

This form recalls the smallest specimens of S. bituberculatus and is the analogue of S. coronatus Defrance, of the European Miocene, but is considerably smaller. It is much less common than S. Aldrichi, from which it may readily be distinguished by its non-ascending posterior lip, its lirate body and throat and the general form of the aperture. It transmits several of the features of S. albirupianus, and we fancy that they seem to reappear in the recent S. bituberculatus Lam. It may possibly be identical with Sowerby's S. bifrons, but which is a much smaller shell, of which the aperture has not been figured. The differences appear too great to unite them without more data."

"This species was only figured from an imperfect fragment taken from the silex beds, in Part I., and it has been thought best to illustrate the more perfect and complete specimen from the Chipola beds upon which the description was based. This shell attained a maximum length of 65 mm."