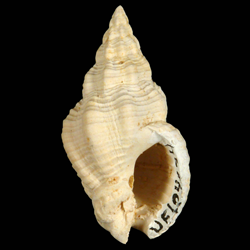 "Shell acute, with 2 smooth, nuclear and 7 strongly sculptured whorls, somewhat appressed at the suture; spiral sculpture much as in P. semicostatus of small, stout, rounded, partly alternated ridges swollen where they pass over the ribs, sparser and stronger on the base; transverse sculpture of (on the last whorl 7) strong, rounded ribs, evenly distributed and most prominent at the periphery; aperture wide, the outer lip lirate, the pillar keeled and reflected on the anterior edge; a sharp constriction and keel behind the siphonal fasciole, which is flexuously and imbricately sculptured transversely with a few small, spiral grooves; a moderate callus on the body and pillar, Lon. 25, lat. 13 mm.

Oligocene of the Chipola beds, Calhoun County, Florida, Dall. No. 114101, U.S.N.M. This species is most nearly related to Phos solidulus (Guppy as Nassa), P. semicostatus, Gabb, and P. guppyi, Gabb, all of which are well distinguished by sculpture and details of form. Among recent species Phos unicinctus, Say (as Nassa), is allied. I have already shown that the last mentioned is distinguished both from Phos and Nassa by its operculum, which is lozenge-shaped, pointed in front and behind with a subcentral nucleus and concentric elements. The shell is more like Phos than Nassa, and was named Phos guadalupensis by Petit in 1852, It is distinguished from the typical species of Phos by the excavation of the upper part of the whorls, and is one of the two species cited by Morch under his undefined genus Strongylocera. The otlier species, P. cancellatus, Quay and Gaimard (not A. Adams), is a synonym of P. textus according to Tryon, and is a true Phos. The name Strongylocera may therefore, perhaps, be revived with advantage for species of the unicincta type, with a concentric operculum, and, among the fossils, P. solidulus, Guppy, P. chipolanus, Dall, P. fasciolatus, Ball, P. costatus, Gabb, and P. erectus, Guppy, should be referred to it."