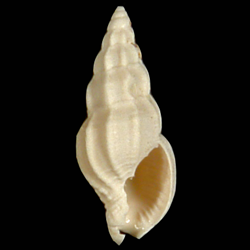 "Shell small for the genus, elevated, conic in outline. The earlier whorls bucciniform, the later closely appressed, obliquely and obscurely shouldered posteriorly, the sides approximately vertical. Body relatively low, compressed laterally, constricted at the base. Whorls of conch a trifle more than 6. Protoconch elevated for the group but not very large, including 5 complete revolutions; initial turn minute, inflated medially, flattened behind, immersed at tip; second volution also inflated medially but becoming decreasingly convex toward its close; 3 succeeding whorls of the nucleus bucciniform in outline, increasing rapidly in diameter, smooth except for a few flexuous incrementals upon the last quarter turn and a few exceedingly fine and faint spiral striations. Dividing line between conch and protoconch obscure, indicated by the gradual assumption of the postnuclear characters. Axial sculpture dominating the spiral, the axials narrow, rounded, cordate in aspect, approximately equal and equispaced except near the aperture, running 10 in number on the later whorls of the spire of the type, often 9 or 11 in other individuals, weakening slightly posteriorly but persisting from suture to suture and on the body to the anterior fasciole. Intercostal areas somewhat flattened, wider than the costals. Spiral sculpture low and flat, a little more prominent on the costal than on the intercostal areas. Four or five primaries on the later whorls of the spire, nine on the body not including the two more elevated spirals that gird the ill-defined pillar. Four to six microscopically fine, flattened lirae crowded between each pair of primaries, the medial lirae usually a little less fine than those on either side; the gently sloping shoulder behind the posterior primary bearing 15 to 18 similar threadlets; the secondaries on the base, however, a little coarser and more irregular than those on the medial portion. Posterior portion of whorl closely appressed against the preceding volution, the sutures distinct and undulatory. Aperture obliquely lenticular, acutely angulated posteriorly. Outer lip broadly arched; internal lirae sharp, persisting almost but not quite to the margin, 12 in number, corresponding in position to the intercostal areas. Labium excavated at the base of the body. Parietal wash heavy near the posterior commissure, an obscure plait commonly developed in the adult a little in front of the angle. Pillar reinforced. Marginal fold obtuse, outlined posteriorly by a broad and shallow sulcus. Anterior fasciole arched, acutely keeled behind, incrementally cor rugated and spirally lirate. Anterior canal short, broad, recurved. Terminal notch deep, obliquely directed, the produced posterior margin of the fasciole constituting one arm, the- sinuous extremity of the fasciole the other. Umbilicus imperforate.

Engoniophos glyptus has much the aspect of Uzita, but the contour of the anterior extremity and the character of the marginal fold are more suggestive of Phos, in a broad sense. The posterior parietal fold is not constant in its development and is never very prominent. The diagnostic characters of the species are the slender outline, the oblique shouldering of the whorls, the cordate axial sculpture, and the very low, flat primaries with equally low, flat, and exceedingly fine secondaries crowded between them.

Engonlophos glyptus is a smaller, more slender, more delicately sculptured shell than the genotype, but a possible precursor.