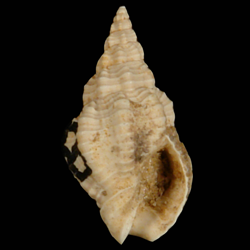 "Shell rather small but heavy, squat, ovate-conic in outline. Aperture approximately half as high as the entire shell. Body very broadly rounded and rather abruptly constricted at the base. Whorls probably about 5 in a complete conch. Nucleus and earliest postnuclear turn lost in all available material. Conch both axially and spirally ornamented. Axials narrow, rounded upon their summits, persisting with approximately uniform strength from suture to suture, though weakening a little posteriorly, and, on the body, continuing to the anterior fasciole; ribs 11 in number upon the body of the type, 10 upon the final whorl of the spire, and 9 upon the antepenultimate whorl, equisized and regularly spaced except directly behind the aperture. Intercostal areas concave, of approximately the same width as the costals. Spiral sculpture developed as a regular banding over the entire surface of the conch; primary spirals 3 on the later whorls of the spire, twice as many on the body exclusive of the base, equal and regularly spaced, overriding the costals and inclined to expand a little upon their summits; 1 or 2 secondaries usually intercalated between the posterior primary and the suture and also developed fortuitously between the other primaries. Base of body girded with 4 additional and somewhat more prominent primaries, more sharply elevated upon their posterior than upon their anterior faces. Suture line impressed, undulated in harmony with the costals of the preceding whorl. Aperture broadly and obliquely lenticular, acutely angulated at the posterior commissure. Outer lip broadly and feebly arched, lirate within; lirae usually 9 in number, evenly spaced, produced far within the throat but evanescing abruptly a little behind the margin, most prominent at their outer terminations. Inner wall of aperture rather abruptly excavated at base of the body. Parietal and pillar wash rather heavy. Marginal fold prominent, the sulcus behind it broad and moderately deep. Anterior canal nassoid. Anterior fasciole cut off from the base of the body by a strongly convex depression margined posteriorly by a sharply elevated keel, flexuous, incrementally corrugated, its sinuous extremity forming an arm of the obliquely directed U-shaped terminal notch, the produced posterior keel forming the other arm. Umbilicus imperforate.

The outline is that of Ilyanassa, but the characters of the aperture and the anterior extremity do not permit its reference to that group. Phos (Strongylocera) costaius Gabb, from the Baitoa formation (lower Miocene) of the Dominican Republic, is intermediate in its characters between P. pedanus and P. chipolanus; it is more elevated than P. pedanus and more inflated, with a more pronounced anterior fasciole. The sculpture pattern of P. pedanus is similar in general character to that of P. tribakus from the Oak Grove sand.