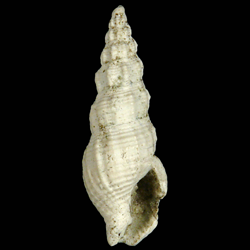 "General Characters. — Shell slender; spire greatly elevated for the genus. Aperture less than two-thirds the total altitude. Whorls closely appressed, almost flat, though apparently somewhat convex because of the greater prominence of the axial ribs near the median line of the whorl. Body whorl gently rounded, rather sharply constricted at the base. Suture distinct, not conspicuous, gently undulated by the axial ribs of the preceding whorl.

Protoconch. — Protoconch small, smooth, acutely tapering, paucispiral, although the exact number of turns can not be determined because of the decortication of the apex.

Sculpture. — Axial sculpture of prominent, rounded ribs and of incrementals visible only under magnification; costae 7 or 8 to the whorl, rounded, though sharply defined, conspicuous elevations, which, on the spire, persist from suture to suture, although strongest on the periphery; body costae rounded on the summits, the sides almost vertical, gradually flattening as they approach the canal; prominence of the costae greatly increased by the peculiar spiral lirations which cross them. Primary spirals 3 or 4 in number upon the whorls of the spire, broad and low and very flat in the intercostal areas and on the sides of the costae; lirae abruptly thickening, however, upon the summits of the costals thereby throwing the intercostal areas into relief and apparently increasing the elevation of the costae; secondary spiral lirations narrow, flat bands less than one-half as wide as the primaries and separated from them by interspaces the width of the former; secondaries not increasing in prominence as they cross the axials; posterior fasciole rather wide, sculptured with an anterior secondary, 2 or 3 primaries of uniform elevation and without intercalated secondaries, together with a broad, pre-sutural ribbon equal to the primaries in altitude and exceeding them in breadth; body whorl ornamented with 12 primaries; secondaries intercalated on the posterior portion but absent anteriorly; anterior fasciole differentiated but not prominently keeled, sculptured with 5 to 8 crowded lirae.

Observations. — Phos sloani is known only from Sumter County, South Carolina, and is quite unlike any described form. It is characterized by the peculiar, abrupt increase in the prominence of the spirals as they mount the summit of the costals, so that the intercostals have the appearance of being smoothly scooped.

We have the pleasure of naming this interesting species in honor of Dr. Earle Sloan, of Charleston, South Carolina, whose name will always be so pleasantly associated with the development of the Geological Survey of South Carolina.