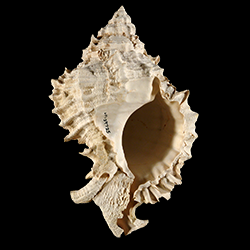 This species extends its range from the warm water off the coast of North Carolina to Florida, the mainland round to Venezuela, etc., and the Antilles. One of the brightest-colored specimens I have seen came from near Beaufort, N. C. The colors are variable, and I suspect the Murex imperialis from the island of Margarita, West Indies (if not an error for Margarita in the Gulf of California), referred to by Mr. Tryon, is merely a very large, pale, bright-mouthed M. pomum. The typical color of the mouth is pale salmon-color picked out with dark brown, but in some specimens the brown becomes a tolerably lively yellow, and the salmon-color a pale pink, while in still others the mouth is white, especially at inter-varical periods. The number of varices is usually three, but this is not invariable; there may be four, or the number may be irregular. The young shell sometimes looks like a little stumpy Fusus, of a vivid pink. Varices are inconspicuous in the early whorls, which are reticulated, while the nucleus is deep pink, or brown, smooth, small, and about two-whorled. The epidermis of the young shell is quite hispid."