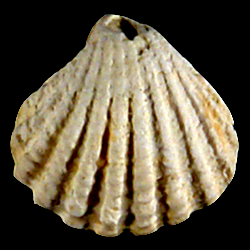 "Shell suborbicular, subequilateral, thick and ponderous, with about eighteen convex Iongitudinal ribs, cancellate by concentric elevated lines, which do not penetrate into the interstitial narrow spaces, and which are obsolete on the umbo, and on the anterior side: inner margin deeply crenate: hinge with two diverging teeth, separated by a large cavity on one valve, and on the other, a single large triangular prominent recurved tooth, closing into the cavity.

Length 0.5 of an inch, breadth rather more.

This curious shell was discovered by Mr. Stephen Elliott, on the Coast of South Carolina. Its characters do not at all correspond with those of Venericardia, as defined by Lamarck in his last work, the Animaux sans vertebres, where he attributes to the genus 'two oblique cardinal teeth directed to the same side.' In the Ann. du Mus. Vol. 7, page 55, he admits, however, that 'in certain species, which ought, perhaps, to be separated from the Venericardes, there is on one valve, but a single cardinal tooth, and upon the opposite valve, two divergent cardinal teeth.' These characters, I conceive, correspond with the shell above described, and although, should they be tolerated, an artificial assemblage will be the result, yet for the present, I refer this shell to the genus Venericardia, under this authority of Lamarck.

This species will be regarded as an interesting addition to the Fauna of the present world. The first recent species was described by Lamarck as a native of New Holland. All other known species are found only in the fossil state."