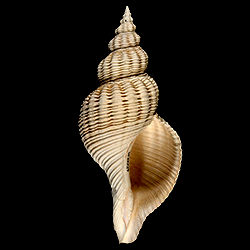 "Shell sub-fusiform, of about ten volutions, longitudinally ribbed or plicated; spire elevated, nearly one-third the length of shell; whorls convex, those of the spire angulated at about the middle, crossed by numerous elevated, and more or less rounded, revolving lines, from ten to fourteen on each of the more prominent whorls; central line most prominent, forming the median angulation or carination; interstitial finer lines present at irregular intervals.

Body-whorl with about 15-20 ribs or plicae, which, as a rule are less prominently angulated than those of the spire, making the shell appear more regularly convex; revolving lines somewhat over thirty, a limited number of which are interstitial; aperture about one-half the length of shell, or somewhat over, produced anteriorly into a broad canal of moderate length; outer lip prominently lined on the inside; columella with two very oblique folds, the lower of which is practically obsolete.

In the banks of the Caloosahatchie, below Fort Thompson."