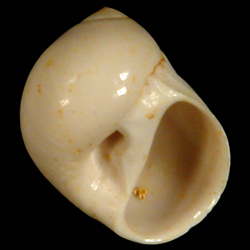 "Shell small, highly polished, rather slender for the genus. Whorls 4.5 including the turn and a half of the protoconch, which is vitreous, small and flattened, the initial half turn almost entirely immersed. Whorls of conch increasing rapidly in size, wound somewhat obliquely so that the position of the suture line becomes more and more anterior toward the aperture. Body whorl somewhat obliquely flattened in front of the suture, smoothly rounded medially. Surface smooth except for incremental striae, which are most obvious posteriorly. Whorls closely appressed but the sutures distinct. Aperture semielliptical, slightly patulous, anteriorly. Outer lip arcuate, somewhat flattened posteriorly and more strongly rounded anteriorly. Columellar margin oblique. Parietal wash heavily deposited from the labrum to the umbilical area, the callus partially cut off from the margin of the labrum by a surflcial sulcus. Umbilicus roughly crescentic, overhung posteriorly by the parietal wash. Parietal callus commonly cut off from umbilical callus by a surflcial groove. Umbilical rib low, broad, evanescent in front, filling a little less than half of the umbilical pit. Outer margin of the umbilicus abruptly rounded but not angulated. Interior striations rather deep. Margin of aperture reinforced directly in front of the umbilical area.

Polinices? demicryptus n. sp. has been confused with Euspira hemicrypta (Gabb) from the lower Miocene of New Jersey. It is separable by the heavier shell, the lower spire, the less inflated body, and by the low umbilical rib. The relatively heavy shell, the obliquely compressed outline, and the development of a funicle seem to exclude this species from Euspira.

Polinices? demicryptus has much in common with the youthful P. judsoni from the later horizons of the Alum Bluff group, and may be an undersize representative of that group in the Chipola formation. It is a larger species, however, than N. semen Lea and has a less elevated, less rounded spire."