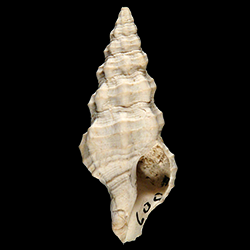 "Shell elevated, slender, acute, nine-whorled, with strong sculpture and a very short canal; nucleus smooth, subglobose, of a whorl and a halfy subsequent whorls with spiral sculpture of (on the last whorl about nine) strong, distant threads, with much wider, rather smooth interspaces; of these threads three appear on the upper whorls, the posterior thread somewhat the most prominent; between the latter and the suture behind it the whorl is appressed toward the suture and shows a few much finer spirals, but these are absent between the primaries; transverse sculpture of rather marked lines of growth, rarely raised and imbricated near the suture, and (on the last whorl seven) stout, rounded ribs, obsolete near the suture and on the canal; base of the whorl constricted; canal short, deep, nearly straight, with a strong fasciole; outer lip simple, internally lirate ?, inner lip callous, with one or two plaits anteriorly. Lon. of shell 25.0; of aperture 10.8; max. diam. of shell 10.3 mm.

A single nearly adult and several young specimens were found in the Caloosahatchie marls.

This species is distinguishable from the preceding by its shorter canal, stronger sculpture, absence of tessellated sculpture between the spirals and of the presutural constriction. It does not seem closely related to any known recent species of the local fanna."