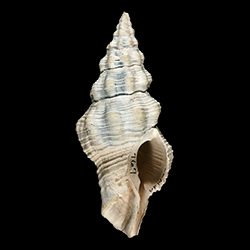 "The shell is solid, openly umbilicate, fusiform, the spire tapering regularly, the periphery (viewed in front) being a little above the middle of the length. Anteriorly it is somewhat cylindric and terminates bluntly, with a prominent, rounded siphonal fasciole around the deep umbilicus. Sculpture of moderately prominent axial folds (nearly nine on each whorl), weak near the suture and vanishing at the basal contraction of the last whorl. Over all a sharply developed sculpture of strong spiral cords alternating with threads except in the subsutural zone, where the cords are smaller and subequal. On the cylindroid anterior part there are about four somewhat larger cords with interstitial threads. The racquet-shaped aperture is strongly lirate within, the lirae about 12, arranged in pairs, the lower pair short, hardly entering. There is a strong ridge on the parietal wall near the posterior angle of aperture, and four columellar folds, the lowest one short, not entering.

This beautiful fossil is quite unlike anything known from the Caloosahatchee beds. It is most nearly related to the living Latirus trochlearis and L. mcgintyi, but differs conspicuously by the profuse development of spiral sculpture and the weaker axial folds."