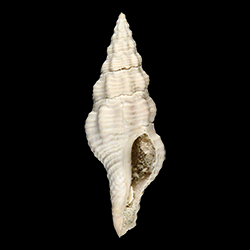 Remarks.--Latirus caloosahatchensis is proposed as a replacement name for Latirus tessellatus Dall, 1890, which is preoccupied by L. tessellatus (Recluz, 1844) and by L. tessellatus (Kobelt, 1874). The name appeared in several important revisions published prior to Dall's work (e.g. Kobelt 1874, 1876; Tapparone-Canefri 1879; Tryon 1881; Paetel 1887).

[...] Etymology.--Named for the Caloosahatchee River, whose banks yielded the first specimens of this species. A century ago, the spelling of the name of the river ended in -ie, and both Heilprin (1886-1887) and Dall (1890) used that spelling; in present usage, the name ends in -ee."

To access this description in its original formatting through the University of Florida Digital Collections, click here.