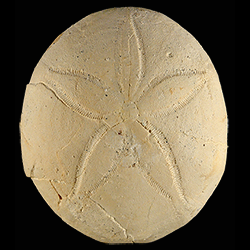 "Test large, suborbicular, and moderately high; upper surface convex and broadly rounded, the posterior surface more gently inclined than the anterior; lower surface nearly flat except in the area surrounding the peristome, where it is shallowly concave. Apical system, situated opposite the peristome, is rather large, granular, and slightly elevated; so far as revealed, a genital pore is at the juncture of the petals and a smaller radial pore is opposite each petal. Ambulacral areas petaloid at dorsal portions. Petals rather long, extending nearly to the ambitus, expanding to about one-third their length from the apical system, then gradually contracting distally, and nearly closing at their extremities; poriferous zones rather wide, shallowly depressed; pores nearly equal in size and rounded in outline; pairs of pores conjugate. Interporiferous areas weakly tumid. Posterior interambulacrum weakly medially arched. Periproct rather large, longest transversely; supramarginal, the lower margin being about 4 millimeters above the ambitus; the upper arched margin slightly overhangs the aperture. Peristome excentric anteriorly, pentagonal, transversely elongate, and surrounded by a large well-defined floscelle with prominent bourrelets. The outer pores of the floscelle are more direct and more regularly placed; the inner ones are more irregularly placed and some of them are arranged in two rows. The surface of the test is closely set with scrobiculate tubercles.

Cassidulus evergladensis resembles, in a general way, the figured type of Cassidulus (Pygorhynchus) alabamensis Twitchell, a species collected at the Natural Bridge, St. Stephens, Washington County, Ala., but the lower surface of the test of that species is more concave longitudinally, and the periproct is at a greater distance above the ambitus. The same authors refer the "St. Stephens limestone" (upper part) to the lower Oligocene."