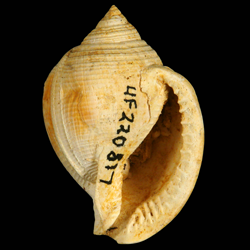 "Shell of moderate dimensions for the group, rather thin and easily decorticated. Aperture approximately three-fourths the length of the entire shell. Spire very short and acutely tapering, the component volutions narrow but feebly inflated and very narrowly tabulated like the whorls of Buccinum. Body strongly globose, smoothly constricted into the short, broad pillar. Whorls 7 in all, separated by slightly impressed sutures. Apical region decorticated so that the dividing line between the conch and protoconch is lost. Protoconch rather large, papillate, paucispiral, the initial turn well-rounded and immersed at the tip, the succeeding whorl or whorls contoured like the early whorls of the conch. Axial sculpture restricted to incremental striae that strengthen toward the aperture and to occasional traces of former terminal varices. Spiral sculpture also buccinoid; spirals very low and flat, somewhat unequal and irregular, a little stronger posteriorly than medially; about 9 in number on the final whorl of the spire, almost four times as many on the body and pillar; interspaces shallow and of approximately the same width as the spirals. Anterior fascicle threaded with half a dozen more sharply defined lirations, equal and equispaced. Aperture moderately wide, somewhat auriculate, obtusely angulated but not sulcate posteriorly. Outer lip broadly arcuate, somewhat produced posteriorly on the preceding whorl; much thickened along the margin, lirate along the inner surface of the varix; lirae from 15 to 20 in number, some of them longer than the others, all of them normal to the margin except the anterior, which outlines the entrance to the canal. Inner margin of aperture flexuous, well-rounded along the body, feebly excavated at the base of the body. Parietal wash thin but spread over a broadly arcuate area. Pillar heavily reinforced, the outer margin of the callus thick and laminated; surface of callus toward the aperture wrinkled posteriorly, rather heavily corrugated toward the canal. Anterior canal short, rather narrow with well-defined parallel lips; recurved and obliquely truncate at its extremity.

Sconsia paralaevigata is close to S. laevigata Sowerby from Santo Domingo, but it is decidedly less elegant. The inflation both of the whorls of the spire and of the body is a little higher in the Chipola form, and the constriction at the base of the body consequently more abrupt. The spiral sculpture in the Santo Dominican form is finer, and so high is the polish of the shell that the lirae seem to be subcutaneous. The Chipola individuals though fairly well-preserved are not polished, and the spiral sculpture has a normal aspect."