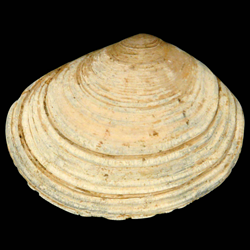 Shell small, moderately convex, but more compressed near the posterior end; anterior end slightly longer, rounded; posterior end sloping above, with a well-marked radial fold, especially in the left valve, subtruncate obliquely, near the base, behind; sculpture of ten or twelve prominent, rounded concentric riblets separated by equal or wider interspaces, not very regularly disposed; the ribs tend to be especially prominent in the middle of the disk and to be obsolete behind the posterior fold; the surface is also concentrically striated; hinge strong, normal; beaks not prominent; pallial sinus short, rounded, ascending towards the umbo and not extending behind a vertical therefrom. Alt. 6.5, lat. 8.0, diam. 3.5 mm.

This stout, strongly sculptured little shell recalls the young of carinata, but is much more inflated, solid, and more coarsely sculptured."