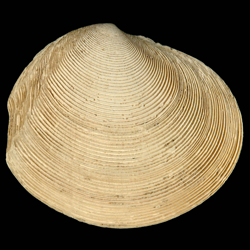 This species was originally named by Dall (1892) without a written description or figure.

"Pliocene of the Caloosahatchie River and Shell Creek, Florida; Ball and Willcox.

This extremely fine shell is of the same general type as S. perlamellosa, but of different outline and proportions, as the figures show very well. It is one of the most characteristic shells of the Florida Pliocene and is not exactly represented by any of the recent species of the coast so far discovered. It is named in honor of the late Dr. Isaac Lea, one of the earliest, most careful and thorough workers on our Tertiary Paleontology."