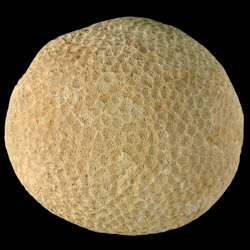 "Twelve specimens, all of them excellent, serve as the basis of the following specific diagnosis. One is designated as the type in the collection.

The corallum usually forms a rather small rounded head, but a few are elongate, and one is flattish, sublamellate. The heads attain a diameter of between 45 and 50 mm. About a third of the specimens show signs of having been attached or have not calices uniformly distributed over the whole outer surface of the corallum.

The corallites are rather large, and are rather uniformly hexagonal or pentagonal; usual diameter is 4.5 to 5 mm.; intercorallite wall distinct and zigzag in plan. The calices are shallow or superficial.

Septa thick, usually in almost four complete cycles, the fourth cycle is as a rule absent in one or two systems. Septal margins dentate, each dentation rounded, corresponding to the upper termination of a septal trabecula, the number of dentations on a septum of the first cycle varies from 8 or 9 to 13. The length of such a septum is almost 2.5 mm. Septal grouping is as usual in the genus, the members of the first cycle are continued directly to the columellar space and do not form parts of septal groups; the members of the second cycle, also, are continued directly to the columellar space, but each member of this cycle is the middle of a septal group, the members of the third cycle bend toward it, and the members of the fourth bend toward the included member of the third. Along the course of each trabecula is a regular row of granulations, which are compressed in a plane transverse to the longitudinal course of the trabecula. Septal perforations are frequent near the inner margins of the septa, usually occurring in the intertrabecular spaces, but in places a large perforation interrupts a trabecular course. The perforations become rarer as the wall is approached. Completely imperforate septa are very rare or do not exist at all.

Both synapticulate and dissepimental endotheca is present. In places as many as four or five vertical rows of synapticulae can be distinguished. Very thin dissepiments are abundant. The wall is formed by synapticulae that are so elongated in a vertical row that they fuse and produce a continuous wall with only an occasional perforation.

The columella is papillary, about two papillae being larger than the others. In worn specimens it is very prominent, appearing compressed styliform.

The most striking differences between S. pliocenica and S. radians, to which it probably has the greatest affinity, are its larger and much shallower calices. S. californica Vaughan from the Pliocene of Carizo Creek, California, is a nearly related species."