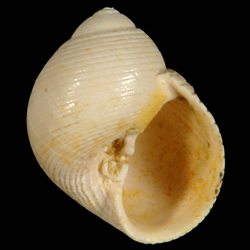 This species was originally figured by Dall, 1900, without a written description.

"Shell polished, small, solid, globose; the whorls of the low spire narrowly tabulated, broadly and feebly convex; the body more inflated toward the base than directly in front of the suture. Whorls of conch 2%, the protoconch a little more than twice coiled. Initial quarter turn largely submerged, the succeeding volutions well rounded but not elevated, separated from one another by impressed sutures. Beginning of conch marked by the initiation of the spiral sculpture. Spirals appearing as incised linear sulci, approximately 9 on the initial whorl of the conch and, in the type, about 30 on the body, uniform for the most part but somewhat wider and deeper near the suture and the umbilical area; rendered more or less irregular by the incremental sculpture. Sutural channel closely striated by the growth lines and threaded near the outer margin with a single fine lira. Aperture lobate, somewhat patulous anteriorly. Outer lip ample, broadly and asymmetrically arcuate. Inner lip oblique; glazing the base of the body, reverted slightly over the umbilical pit and forming its ventral wall; feebly insinuated, indicating an incipient umbilical rib. Umbilicus deep but not very wide, striated within by incrementals only but spirally threaded near the outer margin at the periphery.

The species varies within rather narrow limits in the number and spacing of the spirals, especially near the umbilicus. Sigatica euglypta is almost three times as large as S. caractica but with not much more than half as many spirals. The Recent southern east coast and West Indian Sigatica carolinensis (Dall) has a smaller thinner shell with less pronounced posterior tabulation.

The species is rather common at the type locality and the type horizon and occurs, though very rarely, in the Chipola and Shoal River formations as well."