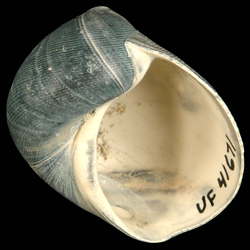 Shell solid, rather thick, varying in rotundity with age, the young ones as a rule being more naticoid in shape, while the more advanced are relatively flatter, and the fully mature specimens again are more rotund; whorls four or five, sculptured with rather fine, flattish, revolving threads of varying size, separated by channelled interspaces, varying in width and minutely undulated or reticulated by the sharp, close-set, fine incremental lines; aperture large, oblique; base somewhat flattened, periphery rounded; pillar-lip arched, broad, flattened somewhat and sometimes excavated, with a narrow sulcus behind it, running up to the imperforate umbilical region; callus on the body moderate, lip not reflected. Max. Ion. of adult 33; diam. 27 mm.; Ion. of young shell 16.5; axial elevation 11; diam. 15 mm.

This species is most nearly related to S. declivis, from which it may be separated by its closed umbilicus and the absence of the emargination of the pillar, which is the most characteristic feature of declivis. It also recalls S. bilix var. mississippiensis, which has a perforate umbilicus and is more rotund. The specimen figured is from the silex-beds; the much larger and more characteristic specimens from Chipola were only obtained later. The sculpture may be close or sparse; it varies in this respect in nearly all the species."