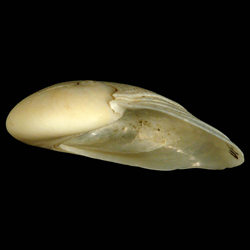 "SPECIFIC CHARACTER. Depressed: beneath, revolutions visible almost to the summit.

DESCRIPTION. Shell oval, very much depressed, but a little convex, with numerous, transverse, slightly undulated, sub-equidistant, impressed lines and longitudinal wrinkles; transverse lines obsolete beneath: spire not at all prominent, only a little convex: volutions about three: suture a simple impressed line: within, the slightly elevated line is more or less obvious, not reaching the margin of the labrum: revolution of the whorls visible almost to the summit.

OBSERVATIONS. This shell is abundant on the coast of New Jersey and farther south; but I have never had an opportunity to examine the animal. I have carefully compared many specimens with a shell sent me by Mr. G. B. Sowerby, under the name of haliotoideus, L. but which seems more accurately to correspond with the leachii, Blainville, as figured by Sowerby in his "Genera," and of which Blainville has formed his genus Cryptostoma. So striking is the resemblance that I have hesitated much to consider it a distinct species.

The chief differences appear to be, that the present species has more general convexity and the spire itself is slightly convex: beneath, the breadth is less considerable between the outer margin and the edge of the mouth, and the revolutions of the spire within are much more obvious.

REFERENCE TO THE PLATE. The upper and lower figures are the superior and inferior views. PLATE XXV."