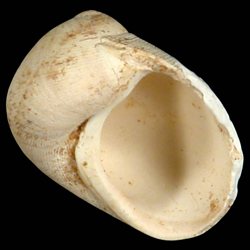 "Shell very thin, fragile, transversely ovate. Spire relatively small and low, the body whorl very large and strongly inflated; maximum diameter falling in front of the median horizontal, the body obliquely flattening behind but strongly and smoothly rounded in front. Volutions of conch 2 and a fraction, of the protoconch 2.5. Surface of protoconch smooth and highly polished; the initial half turn largely immersed, the succeeding volutions somewhat rounded but not elevated, increasing in size regularly but not rapidly; separated by deeply impressed sutures. Beginning of conch indicated by a shallow sulcus, the flattening of the conchal surface, and the abrupt initiation of the spiral sculpture. Whorls of conch broadly convex, increasing rapidly in diameter. Surface sculptured with submicroscopically fine and crowded lirae, minutely crinkled by the incrementals, tending to alternate but more or less irregular, numbering approximately 5 primaries to the millimeter on the body and more than that on the final whorl of the spire. Suture lines feebly impressed. Aperture rudely semielliptical, patulous anteriorly. Outer lip thin, sharp, very much expanded. Columellar wall cutting oval of the basal outline into two unequal parts, of which the apertural is the larger. Inner margin of aperture sinuous. Parietal wall thinly glazed. Inner lip thickened and reflected over the narrow umblical chink. A very small part of the umbilical area exposed and differentiated by the absence of the spiral sculpture that covers the rest of the conch.

A very large adult from Whites Creek (U. S. Nat. Mus. No. 498393, figs. 33, 34) is doubtfully referred to Sinum waltonense. It includes almost 3 volutions and measures 27 millimeters both in height and diameter, almost double the size of the usual specimens from Shoal River. The body of the specimen from Whites Creek, unlike that of typical S. waltonense, is obtusely shouldered and obliquely flattened laterally. The differences may be due to unusual age. The character of the sculpture is similar in the two forms and the seemingly more expanded and patulous aperture of the larger individual is exaggerated by the pose of the specimens. Unfortunately, a uniform scale was not used in the illustrations.

Sinum waltonense is rarely so large as S. chipolanum Dall, is more rounded and more finely sculptured. In S. nolani Maury from the Gurabo formation of the Dominican Republic, the aperture, judging by the illustration, is less patulous and the shell much broader relatively. S. carolanum Spieker from the lower Zorritos formation in Peru is a species of similar aspect but less trapezoidal when viewed from the rear. S. naticoidale Vokes from the upper Miocene of Springvale, Trinidad, is a more chunky shell with a less patulous aperture. S. waltonense is restricted in its distribution to the Shoal River, but it is very abundant within that limited area. No other Sinum has been recognized from the horizon."