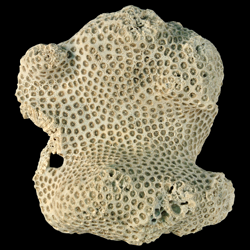 For information on the modern distribution of the species, see WoRMS.

This species resembles the pleiades, but the stars of the worn surface are larger, and have twenty-four nearly equal rays, the intermediate not being obsolete. The interstices in a vertical section are very delicately cellular and irregularly so, as the rays of the stars seem to be interrupted. In the transverse section, the septum contains generally a single imperfect series of delicate cellules which are seldom angular. In these last characters the species approaches the Caryophyllacea. The cellules of the stars are deep and never decompound. The rays meet in a very narrow fundus which is scarcely convoluted. The specimen affording this description is a subturbinate mass six inches high, four and a half wide at top, with the summit nearly flat."