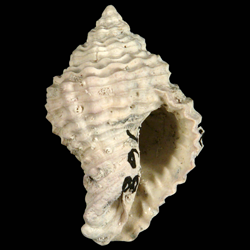 Shell with a small, smooth, bulbous nucleus of one and a half whorls, followed by about six sculptured, rapidly enlarging later whorls; the nucleus is usually lost with the first one or two following turns, so that the apex (as in our figure) seems somewhat blunt, but when perfect, though short, it is quite acute; sculpture of 12-15 transverse rounded ribs, beginning at or near the suture and continuing over the periphery, becoming obsolete on the base of the whorl; the incremental lines are also somewhat alternated in strength and quite distinct; the spiral sculpture consists of (on the last whorl ten or twelve) sharp, even ridges, which override the ribs and descend into the inter spaces, and each of which is usually accompanied by a pair of very fine, sharp threads parallel to it in the separating grooves; the ridges are usually very even in strength, but on the canal vary, being sometimes weaker or even almost absent there; suture distinct, undulated by the ribs, not channelled; whorls full and rounded, the last constricted at the base; aperture rather elongated, differentiated from the canal; the throat strongly lirate, with 8-10 elevated threads ending a little way within the edge of the outer lip, which is crenulated by the sculpture; pillar simple, with a thin callus; canal narrow, deep, somewhat recurved; siphonal fasciole strong, enclosing with the reflected pillar a moderate, not very deep umbilical pit; specimens vary in relative stoutness; one, with the nucleus, measures 24 x 16 mm.; another, which has lost the nucleus, 25 x 18 mm.

This elegant little shell is named in honor of Capt. Menge, in charge of the dredging operations of the canal company, to whom Mr. Willcox in his collecting tour is indebted for numerous courtesies."