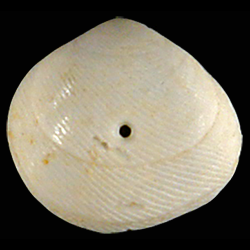 "Shell small, thin, moderately compressed, equivalve, inequilateral, ovate-trigonal in outline, obtusely rostrate posteriorly. Umbonal area well rounded, the tips of the umbones minute, orthogyrate, very slightly anterior in position. Posterior dorsal slope steeper and more produced than the anterior. Anterior extremity very broadly rounded, the posterior narrower, obtusely and somewhat obliquely truncate. Basal margin feebly arcuate, broadly and smoothly upcurved anteriorly. Lunule and escutcheon depressed, very narrow, slightly wider in the left valve than in the right. External sculpture very fine, the lamellae running about 6 to the millimeter, not flexuous anteriorly but sweeping across with a very slight downward curvature from the anterior dorsal margin to the posterior basal angle; sculpture upon the posterior area uniform in the limited number of individuals available for observation and following a rather complicated pattern of asymmetric chevrons which split into five unequal rays. Ligament external, opisthodetic, the ligament groove produced more than half the length of the escutcheon. Dentition delicate; anterior cardinal of right valve and posterior cardinal of left short, simple, laminar; posterior cardinal of right valve and anterior cardinal of left short, bifid; lateral sockets of right valve moderately deep and close to the umbones; dorsal margins of left valve modified to function as laterals. Characters of adductor and pallial scars too obscure to determine.

Strigilla paraflexuosa is the possible precursor of S. flexuosa Say, of the Recent fauna. The Chipola species runs a little smaller and more compressed than the Recent, the lunule and escutcheon are narrower, and the teeth, especially the lateral sockets of the right valve, are more delicate. The external sculpture of the two species is very similar in design, though that of the Recent form is a little coarser and differs in the details of the posterior area. S. georgiana is larger than the Chipola species, more compressed, more produced posteriorly, and with a distinct sculpture pattern upon the posterior area. S. sphaerion is very much more inflated, with a wider lunule and escutcheon, an upcurving of the lamellae upon the anterior third, and a distinct sculpturing posteriorly. The common species at Sopchoppy, in Wakulla County, is imperfectly preserved but probably referable to S. paraflexuosa. S. pisiformis Lamarck, from the Bowden and Recent faunas, has much the same general aspect, though it is more oblique."