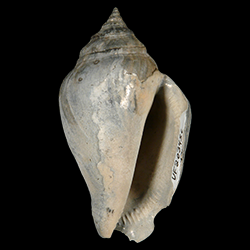 "Shell of moderate size, rather stout, consisting of 2 corroded, apparently smooth, nuclear and about 8 sculptured subsequent whorls. First five postnuclear whorls narrowly conical; succeeding, broadly conical. First and second postnuclear whorls weakly inflated, not shouldered; third, fourth, and fifth shouldered; sixth and seventh not shouldered; body whorl roundly shouldered. Spiral sculpture of narrow raised bands over the whole surface except on the back of the body whorl of adult specimens. Axial sculpture of arcuate riblets on the early whorls, which become gradually shorter on ascending the spire, and on the penultimate whorl are rather low, rounded tubercles situated behind the suture. Body whorl without tubercles. Angled color bands are visible on the back of the body whorl. The apices of the angles of the color bands point backward and originate near the middle of the whorl. The description of the subspecies is based upon two specimens, type and paratype.

The new subspecies is closely related to Strombus pugilis alatus Gmelin but differs from the latter in having a shorter shell with a lower and less turrited spire, and fewer nodules or tubercles. In the new subspecies, the suture winds upon or above the spiral row of tubercles except on the earliest whorls and on the last half of the body whorl. On S. pugilis alatus the suture falls below the tuberculate shoulder.