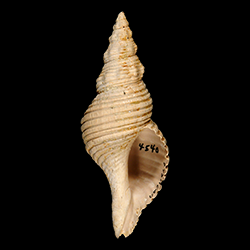 "Shell elongated, acute; whirls eight rounded, ornamented with wide, and finely striated ribs; striae transverse to the ribs, or longitudinal; ribs of the body whirl, about fifteen, the middle of the body-whirl upon the outer lip, the four widest ribs alternate with three narrow ones; plaits three, concealed within the pillar lip; spire longer than the aperture.

This shell is rare in the miocene of North-Carolina. It would pass for fusus if the pillar lip was not examined just within the aperture, the plaits reaching only to its edge, but they are strong and well developed through its entire length.

It is possible this shell may have been previously described, but its broad, flat and very prominent ribs are so peculiar, that if observed and described, it could scarcely escape detection. Figure half the natural size."