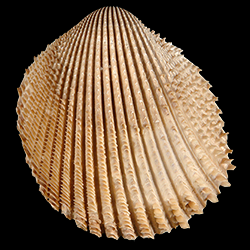 "Description. — Shell rather small, solid, subquadrate, slightly oblique, and moderately inflated. Middle of shell and anterior side rounded; posterior side more steeply declining. Anterior margin broadly rounded, ventral margin narrowly rounded, posterior margin nearly straight. Sculpture of 29 to 31 (on the holotype 31) nearly flat, narrow, high ribs, which are separated by moderately narrow spaces over the middle of the disk and more closely spaced over the sides. Crest of ribs ornamented with thin, nearly erect, marginally reflected funnel-shaped structures, which are more closely spaced on the anterior side than on posterior. The surfaces of the ribs are corroded over the middle of the shell and only the basal parts are revealed. A patch of callus covers the inside of the shell.

Cardium (Trachycardium) evergladeensis most closely resembles C. isocardia Linnaeus in outline but differs from it in having a more quadrate shell. The character of the sculpture on the ribs is also different. The material at hand consists of only two left valves, one of which constitutes the holotype."