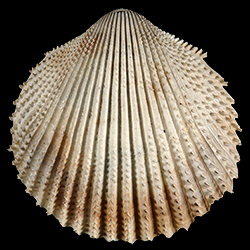 "Pliocene of Florida, on the Caloosahatchie, Alligator, and Shell Creeks, Dall and Willcox; of South Carolina, near Darlington, Burns and Holmes.

Shell suborbicular, moderately inflated, nearly equilateral, with low beaks and a narrow smooth space above the upper anterior rib in each valve; sculpture of twenty-seven to thirty-one rounded triangular ribs, separated by narrow, finely cross-striated channels; the anterior nine ribs bear on their anterior edge small ovate or reniform disks with convex lower surfaces, on each rib connected together by a raised line; the nine ribs next posterior bear on their summits a similar series of half funicular projections, which become more and more indented in the median line until on the last of the nine ribs the series is composed of double leaflets instead of a single arch; on the remaining ribs the projections are laid on the posterior side as a single series (on each rib) of subtriangular leaflets oblique or nearly parallel with the rib on which they stand; internal margin deeply fluted, disk sulcate, posterior margin feebly serrate, hinge normal, delicate, shell not very heavy. Alt. of type 30, Ion. 31, diam. 19 mm. Some specimens reach an altitude of 46 mm.

This is the Pliocene representative of Cardium muricatum, which has not been found in the marls so far, but a close examination will show the very different and much more developed character of the murication. This, however, is found occasionally more or less dwindled; a variety depauperatum has the ornaments represented only by sparse and feeble spinules, which, however, preserve their original form whenever intact. This shows much less variation than C. muricatum in the number of ribs, of which there are almost always thirty-one. In studying the sculpture of this and allied species it is very necessary to select perfectly preserved examples, as in the great majority the minor characteristics have been lost.

This species is the subject of one of Conrad's perennial blunders. In 1862 he proposed the name of C. carolinensis (sic) for the C. magnum of Tuomey and Holmes, which he supposed not to be C. magnum of Born. Again in 1867 he proposes the same name for the C. muricatum of Tuomey and Holmes. In 1875 he again uses the name for a supposed new species of Trachycardium from the Cretaceous of North Carolina, making three distinct species to which he has applied the specific name carolinensis in the genus Cardium, besides his Protocardia carolinensis of 1875, also from the North Carolinian Cretaceous."