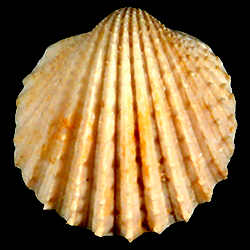 "Oligocene of the lower bed at Alum Bluff and on the Chipola River, Calhoun County, Florida.

Shell small, suborbicular, inflated, nearly equilateral, the posterior end slightly more attenuated and produced; beaks full but not high; sculptured with twenty-five ribs having in section the form of a truncated pyramid, separated by narrower channelled interspaces, elegantly concentrically closely striated; the anterior ten ribs bear A -shaped projections, the anterior wing of the A being broad and produced, the posterior narrow and appressed; the four ribs next posterior have on their tops slender arcuate transverse rather sparse imbrications; behind these the projections shift to the posterior side of the summits of the ribs, gradually becoming more oblique, losing the anterior wing of the arch, and finally appearing as delicate spinules nearly parallel with the ribs; interior margin behind strongly serrate, below and in front fluted, the flutings continued to the umbonal cavity as shallow sulci; hinge normal, delicate; a narrow, smooth area between the most anterior rib and the hinge-margin. Alt. 15, Ion. 15.5, diam. 10 mm.

This little species appears to be rather abundant in the sands."