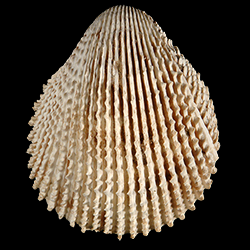 "Shell rather thick and heavy, ovate in external outline, broadly elliptical in the internal, inflated cordate in the double valves. Umbones very prominent, tumid, subcentral in position, orthogyrate, incurved, the apices concealed by the reverted hinge plate. Lunule and escutcheon not defined. External sculpture ornate; 34 costals in the right valve of the type, 33 in the left, commonly one more or less; anterior, medial, and posterior areas each including about 11 ribs, not, however, sharply differentiated in character; medial ribs narrowly tabulated upon their summits, crowned in the young and in the umbonal region of the adults by a flattened cord posterior in position, which is finely striated transversely; away from the umbones on the medial portion of the disk the cord is very much compressed and so closely twisted that it is cut up into a series of sharply crested laminar wavelets with a slight posterior flexure, headed toward the umbones; cords crowning the posterior ribs twisted but not compressed nor sharply indented, becoming gradually thinner and more serrate toward the medial portion of the disk; sculpture of posterior area characterized by the vertical compression of the wavelets, so that they assume the form of a series of elongated, medially sulcate lobes, the broader end directed toward the umbones; in the fully adult specimens the lobate sculpture degenerates toward the ventral margin into a heavy corrugation; intercostal areas smoothly concave and regularly striated concentrically on the medial portion, shallower and smooth or fortuitously striated distally; ribs more closely spaced upon the medial portion than upon the anterior, less closely than upon the posterior, with the exception of the two nearest the dorsal margin; area directly in front of the umbones smooth. Ligament external, opisthodetic; ligament nymph heavy. Hinge armature rather concentrated, a feeble anterior cardinal and a strong upcurved posterior cardinal springing from beneath the umbone of the right valve; a vigorous anterior and a short compressed posterior cardinal in the left valve; laterals in the right valve compressed, prominent, with deep sockets dorsal to them for the reception of the less prominent cardinals of the left valve, rather small, rounded pits developed just ventral to the left laterals for the reception of the laterals of the right valve. Muscle impressions large but rather obscure, the posterior the larger and the more sharply defined. Inner margins deeply serrate, most deeply along the posterior margin, least deeply along the anterior; interior striated in harmony with the external sculpture almost halfway from the ventral margin to the umbone.