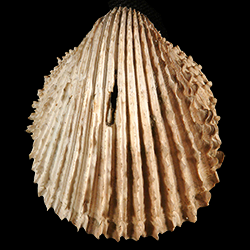 "The shell is rather thick, very plump, much higher than long, nearly equilateral, the posterior end a little straightened. Beaks median, the incurved tip concealed by the reflexed hinge-margin. Sculpture of 30 radial ribs. At the two ends these ribs bear strongly projecting, drop-shaped tubercles. In the median part of the valve the ribs lean posteriorly, and have a narrow tuberculate cord superposed on the posterior side of each, the tubercles elongated parallel to the cord in the median ribs, oblique or twisted on it, on the lateral ribs. The interstices are not very deep at the ends, but in the median moiety of the valve they are narrow and very deeply cut, overhung by the high side of the rib. The middle of each rib, anterior of the tuberculate ridge, bears one or several low cords, and the anterior slope has some fine, irregular, transverse striae. Teeth strong, margin deeply fluted and crenulate, the crenulations narrow and deep on the posterior margin, triangular in the basal margin, very shallow at the anterior margin.

This species is closely related to the recent West Coast Cardium belcheri Brod., which has ribs of the same peculiar, asymmetrical character. In the Gatun shell there are many more ribs, and the tubercles upon them are shorter and blunt, while in C. belcheri they are more spiniform.

Cardium lingualeonis Guppy is proportionately narrower and has more ribs, but seems to be rather close to the Gatun species.

C. stiriatum is, by its complex sculpture, a relatively specialized form; but it is less advanced than the recent C. belcheri, which is further evolved by the reduction in number of ribs; a large number being primitive in Cardium. C. stiriatum may be an ancestor of the recent species.

This species was known to Toula by hard internal casts, which alone are found in a layer containing mainly bivalves. The largest of several of these casts before us measures, length 26, alt. 33, diam. 26.5 mm."