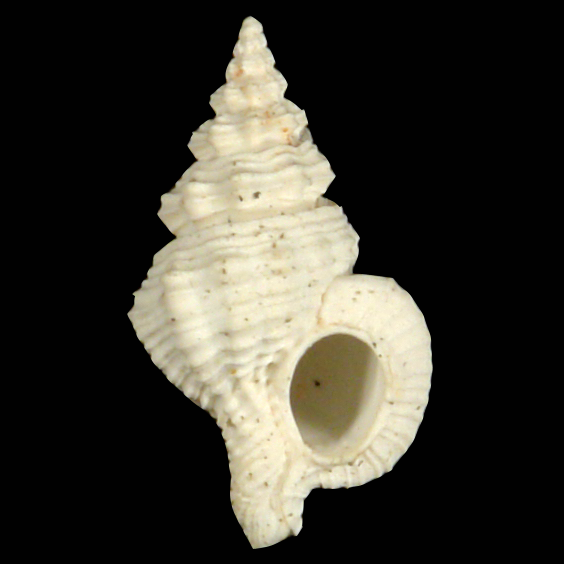 "Shell scalariform, spire elevated, apex acute, body broad and relatively low, abruptly constricted at the base. Whorls strongly convex, tabulated posteriorly, rapidly increasing in size, approximately 7. Protoconch of 1.5 to 2 small, unsculptured coils, the earlier largely immersed. Axial sculpture initiated at the beginning of first turn of conch with obtuse vertical riblets that rapidly develop into broad, rounded, strongly elevated, undulatory costals; 7 or 8 on the whorls of the spire, equal in size and spacing except on the final half turn, most prominent on the periphery of the whorl and tending to alternate in arrangement. Spiral sculpture of sharply elevated lirations that override the costals and are equally prominent on the costal and intercostal areas; spirals initiated simultaneously with the axial sculpture by the appearance of the 2 lirae that crown the periphery of the whorl; first one, and then a second finer threadlet introduced behind the periphery and later either 1 or 2 lirae in front of the periphery, those nearest the sutures the least conspicuous; primaries on the body whorl 8 or 9 including the 2 on the shoulder; finer secondaries commonly introduced midway between the primaries, that at the base of the body approximating in strength the primary behind it. Anterior siphonal canal closely sculptured with 9 or 10 sharply elevated lirae, the 1 or 2 posterior spirals set a little a part from those in front of them. Siphonal canal cut off from the base of the body whorl by a convex area that is strongly rippled by the axial costae but not spirally threaded; delicate filamentary incrementals visible under magnification in the interspiral areas. Suture line distinct, impressed, crenulated by the axials of the preceding whorl. A narrow shoulder in front of the suture strongly defined, persistant almost to the apex; concave near the aperture, sloping and feebly undulated by the axials on the earlier volutions and occasionally threaded with a single fortuitous spiral near the anterior margin. Aperture elliptical, smoothly and evenly glazed within, with no trace of any angularity either anteriorly or posteriorly nor of any denticulation or rugosity on either the outer or the inner lip. Labrum strongly varicose, the varix obtuse and prominent, encroaching posteriorly on the preceding whorl. Anterior canal closed, short, and rather feebly recurved. Umbilical chink not visible.