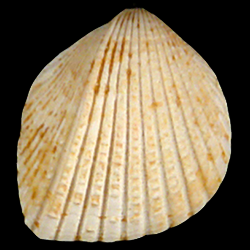 Shell small, subquadrate, moderately inflated, truncate behind, rounded in front, with rather low beaks; sculpture of on the body twenty-two to twenty-four subequal rounded ribs with narrower channelled interspaces, sharply cross-striated between the ribs; on the posterior truncation twelve to fourteen similar but smaller ribs, a few near the hinge-margin wider than the rest, with no marked smooth area between them and the margin either in front of or behind the umbones; an easily detachable outer layer covers the ribs with fine concentric threading, rising at intervals into semilunar small nodules, all of which is frequently worn off when the ribs appear polished; internally, the margin is strongly fluted; hinge normal, strong. Lon. 6.5, alt. 7.0, diam. 6.0 mm. A single broken valve reaches 10 mm. in height.

This little shell stands almost midway between typical Fragum and Trigoniocardia, having the striated interspaces of the latter and the numerous similar subequal ribs of the former. It seems abundant in the marls."