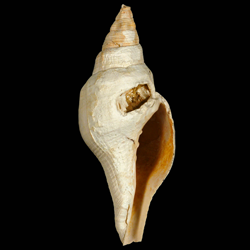 "Near Chipola River, West Florida, one mile south of Bailey's Ferry, Calhoun Co., Florida; on Ten-Mile Creek, a mile west from the ferry; also at the corresponding horizon of the Lower Miocene (lower bed) at Alum Bluff.

This form would at first sight be taken for a variety of T. Wilsoni with a little shorter spire and more rounded whorls than that species, but a study of a good series shows the following distinctive characters:

The last whorl is rounded and not with flattened sides and the keel at the shoulder is obsolete; there is no presutural constriction or band; the whorls, except in the earliest on two, are not appressed, but distinct or even partially channelled; the space of 20.0 mm. from the base of the larval shell forward includes three and a half instead of seven whorls; instead of seven or more ribbed whorls there are but two or three; instead of uniform strong spiral threads as in T. Wilsoni, the spirals on the early whorls alternate coarse and fine; the whorls are gracefully rounded and not flattened; the diameter of the spire at the anterior end of the larval shell is 4.0 mm., instead of 1.3 mm.; the spirals are finer and continue more distinctly over the whorls in the adult; the adult shell has six whorls beside the nucleus, T. Wilsoni has eleven or more in the same length.

T. chipolana varies, as all the species do to some extent, in its elongation and in the presence or absence of an umbilical chink; the aperture is more than half the length of the shell and has a prominent sinus behind; the apertural callus is prominent, the lip simple, the canal narrow and moderately differentiated. A rather short, thick specimen measures 120.0x55.0 mm., without the nucleus; a more elongated specimen 1 38.0 x 55.0 mm., the aperture being 85.0 mm. long. The nucleus is remarkable, consisting of more than four (none are complete) spirally striate, or smooth, regularly coiled whorls, probably preceded by a tip like that of T. regina (PI. 10, fig. 7). The fourth of these whorls has exactly the same diameter as the first, so that the coil is nearly subcylindrical, having a length of 9 and a diameter of 3.5 mm. If to this we add the lost tip, we have a larval shell more elongated than that of T. regina, though the latter is by far the most slender shell."