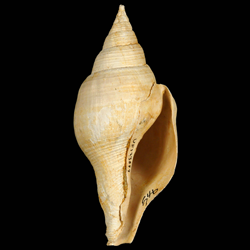 "Shell probably very large and heavy, the height of perfect individuals exceeding a foot. Outline rudely fusiform, the maximum diameter approximating the median horizontal. Whorls of conch probably 8 or 9 in number. Outline of the early volutions obscured by the axial costae, the medial whorls narrowly tabulated, flattened laterally or feebly rounded, rudely trapezoidal in outline; the later volutions developing an acute keel a little behind the median line, this shouldered portion becoming increasingly less oblique and in the older individuals, becoming tuberculate. Body flattened medially, smoothly constricted at the base. Protoconch broken away in all available material but probably large at the base. Axial sculpture, with the exception of theincrementals, restricted to the early whorls. Axials on the earliest whorls of the conch narrow, rounded, persistent to the posterior suture, probably as many as 10 IN number, rapidly becoming broader and evanescing on the closely appressed posterior third, reduced to 7 in number on the third and later volutions, becoming increasingly broader and lower on each succeeding volution and altogether obsolete near the fifth. Spiral lirae initiated with the axials, sharp and sharply elevated, and from 4 to 0 in number upon the earliest whorls, with 2 or 3 additional lirae developed upon the appressed posterior portion; secondaries intercalated on the third or fourth volution, as in chipolanus; spiral sculpture diminishing with the axial but persisting as well defined lirae through another revolution; an obscure spiral shagreening but no well defined liration usually visible on the adult whorls. Base of body, pillar, and fascicle in many individuals finely and rather obscurely threaded. Sutures impressed upon the earlier volutions, feebly channeled upon the later. Aperture obliquely pyriform in outline. Labrum broadly arcuated, not lirate within. Parietal wall heavily glazed, the callus spread in a broad arc from the posterior commissure to the anterior canal. Columella triplicate, the posterior fold placed directly at the base of the body, the outer two approximately equal and parallel to it and almost horizontal near their termination. Anterior canal rather broad, very feebly recurved. Anterior fasciole strongly arched in the adults, corrugated by the incrementals, obliquely truncate or broadly emarginate at its extremity. Umbilicus normally imperforate.

An individual known only from a section through the body whorl but probably referable to this species attains a diameter which, if the shell were of the same relative proportions as a younger and nearly perfect specimen, would give it an altitude of 307.0 millimeters.

Xancus dodonaius is the Oak Grove analog of X. chipolanus Dall. The early post-nuclear whorls of the two species are very similar, but the medial whorls of dodonaius are more flattened laterally and the spiral sculpture is less persistent upon them. Gerontic individuals of chipolanus exhibit an obscure shoulder with irregular protuberances upon it but nothing like the well-defined shoulder of the late adolescent and adult stages of dodonaius. Probably the crenulated and tuberculated shoulder is assumed in the adult stage, though possibly not until the gerontic stage.

The large species from Alum Bluff, too imperfect to be described, has a decidedly broader spire than that of X. dodonaius and a very much heavier pillar. X. dodonaius is apparently less common and less widely distributed than its Chipola analog."