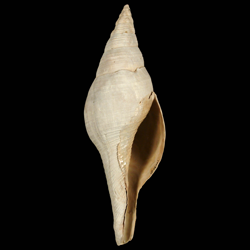 "Shell ovate-oblong, sub-fusiform; spire elevated, gradually tapering, and consisting of from eight to ten volutions; whorls nearly flat, or slightly convex, somewhat angulated above, and only nodulose in the region of the apex; surface covered with revolving raised lines, about five on each whorl below the upper angulation, above which they are less pronounced and more closely placed.

Body-whorl convex, considerably longer than one-half the length of the shell, and ornamented by numerous raised lines, similar to those found on the other whorls. Toward the base these lines become more crowded, somewhat flexuous and coarse, appearing in the form of paired rugations; suture impressed; aperture elliptical, produced into a straight, but deflected, canal of considerable length.

Columellar surface covered with a thick deposit of callus, which leaves partially uncovered a long and narrow umbilicus; columellar plaits three, the median one of which is the strongest.

Length of longest specimen - imperfect below and above, and lacking probably an inch and a half - eleven inches; width across the centre, four inches.

Caloosahatchie, in the banks below Fort Thompson."