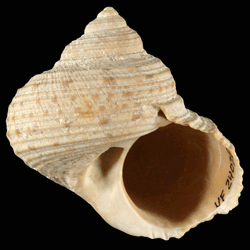 "Pliocene marls of the Caloosahatchie and Shell Creek, Florida, Dall and Willcox.

Shell large, compact, rounded, with a rather elevated apex and about seven whorls. Some specimens show a mottled color-pattern of small white spots on a reddish ground not unlike the pattern observable in some specimens of T. crenulatus Gmelin, but the majority of the fossils have lost all their color. The first few turns when perfectly preserved are flat or concave above, strongly keeled at the periphery, with the suture some distance below the keel; remainder of the whorls spirally sculptured with rounded costae, which increase by intercalation as the shell enlarges, and preserve their relative subordination in size, so that on the last whorl there are spirals of three or four sizes; the ridge next the suture is particularly strong, and the upper surface of the whorls in front of it is slightly constricted; the suture is distinct, but not channelled; across the spiral sculpture the incremental lines are elevated into fine lamellae, which are most strongly marked between the ridges, though when perfectly preserved the whole surface bears them; the spiral in front of the suture, in the early whorls, is occasionally beaded, but as a rule the spiral sculpture, except as cut by incremental lines, is plain and uniform; the base is rounded, sculptured like the upper surface; pillar broad, excavated, with a prominent fasciole bounding the small, deep subcylindrical umbilicus, but not extended into a point below the aperture; outer lip thin, body with a moderate callus, grooved near the suture; throat without lira, aperture evenly rounded. Alt. 46; max. diam. 47 mm.

Operculum recalling that of C. fluctuosum Wood in its main features, except that the narrow lirulae outside of the principal spiral ridge are absent, and the space is, as it were, terraced up to that ridge, while the whole outer surface of the operculum is covered with irregularly disposed, often prickly, pustules.

This fine species is rather abundant in the Shell Creek Pliocene and not uncommon in the Caloosahatchie marl. In some respects it is intermediate between the sections of Turbo now recognized, and between Turbo proper and Astralium. Its nearest relative is a species now living on the western coast of Mexico, but it is also akin to both the Floridian species of Senectus."