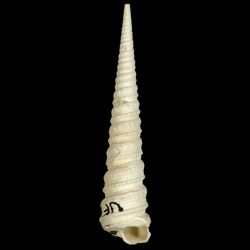 "Nucleus white, polished, loosely coiled, small, with about two very rounded whorls. Shell whitish, violet, or pale rose-color, with longitudinal flammules of dark reddish brown, and light colored primary spiral threads articulated with elongated distant brown spots. Whorls about fifteen, those after the nucleus with a distinct median keel and obscure suture, the later ones with less prominent median or perhaps several indistinct keels; the last two whorls less closely coiled in the adult, showing the posterior edge overhung by the preceding whorl at the suture. Sculpture of primary and secondary spirals very close set, the primaries flatter and polished above; the finer or secondary spirals very fine; both have a tendency to articulation, and the epidermis in the interspaces bridges over fine sharp incremental lines. Irregularities of growth sometimes simulate faint longitudinal waves. Base similarly sculptured, slightly excavated, bordered by a rounded not carinated edge; columella thin, arched; outer lip thin, sinuous, subangulate anteriorly; aperture subquadrate, varying with the sculpture and individual. Max. Ion. of shell, 31.0; max. lat., 8.0 mm.

This interesting species is variable in color, and also in the form of the whorls. Sometimes the latter are perfectly flat, at other times rounded. The brown flammulae are occasionally absent. The striation appears very fine to the naked eye. It is only under a magnifier that the separation into primary and secondary spirals becomes evident. This fine striation will enable the species to be recognized, whatever its color or form, which last, though variable, is not remarkably so. This shell is sometimes bleached pure white, but I have seen no white specimens which were fresh. It is, not rarely, of a delicate rose or violet tint. That what appears to be so common a shell should have gone unnamed until now would be singular, but it has probably been taken by those who have collected it for the tip of a Vermicularia, or the young of T. imbricata L. Complete and adult specimens are rare, fragments common. I find nothing like it in the monographs."