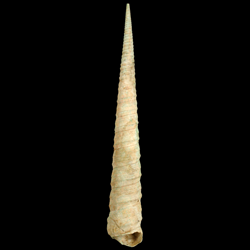 "Shell large, solid, moderately stout, probably of about 25 whorls on complete specimens. Suture impressed. Whorls nearly flat, medially depressed between primary spirals, upper whorls more so than later. Apical whorl rather large, flatly coiled, tip shallowly immersed. Spiral sculpture, on the earliest whorls, of a sharp basal keel. On ascending the whorl, another spiral begins below the suture, weak at first but later nearly equals in strength the basal one. Sculpture on later whorls of 3 primary spirals, one at the upper fourth and two at the anterior fourth and base. The basal spiral is weakest, the other two being of about equal strength. Aside from the primaries, flat secondary threads, usually intercalated by threadlets, overrun the surface.

Turritella aguilerae Bose from near Tuxtepec, Mexico, is closely related to T. alumensis.