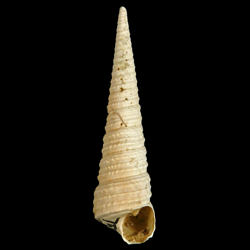 "Shell gracefully tapering, with an acute apex; whorls numerous, straight-sided, carinated above and below, the carinae about equally removed from the upper and lower sutures respectively, distinctly beaded; a prominent subsutural line, placed about medially on the shoulders of the whorls; the flattened space between the carinae with an obscurely beaded sub-median line, and numerous finer lines, which are almost invisible to the naked eye; the beads of the carinae oblique, and inclined in opposite directions, the upper ones downward to the right, the lower ones downward to the left; aperture quadrangular.

Caloosahatchie, abundant in the banks below Fort Thompson."