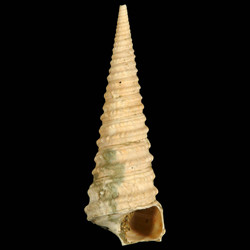 "Shell rather large, moderately stout, not strongly turrited, consists of 21 whorls on type; nucleus not preserved. Whorls subtrapezoidal in outline, weakly constricted at suture on earlier whorls and more strongly on later whorls. Apical turn smooth, rounded in outline, following three to four volutions carinated by a basal spiral. Sculpture on later whorls of 3 prominent, rounded, raised spirals; the upper spiral lies at the upper third; the following and strongest spiral lies at the lower third, being separated from the above spiral by a broad, slightly concave area; and the anterior spiral lies at the base of the whorl and weakly overhangs the suture. The two upper spirals are elongate-beaded or crenulated and the basal spire is nearly bare. Two to three very faint spirals lie in the medial area. A weak spiral lies between the posterior spiral and the upper suture. Base excavated below the basal spiral. Whole surface marked by microscopic incised spiral lines.

The description is based upon two specimens, the type and a paratype from a different locality, the latter with a well-preserved nucleus.

Turritella cookei, n. sp., is closely related to Turritella tuxtepecensis Bose but appears to have a much weaker spiral between the posterior primary and the upper suture than Bose's species.

The new species is named in honor of Dr. C. W. Cooke, of the U. S. Geological Survey.