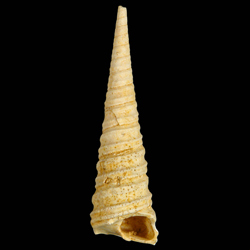 "The locality from which Conrad's type specimen was collected is Greensboro, Md. Martin was doubtless correct in referring Conrad's type of T. terebriformis to T. variabilis var. alticostata. The Florida form differs from the Maryland species in its flatter whorls, sharper and more elevated primary sculpture, more accentuated incremental, and more shallow sutures. The initial whorl of the Chipola species is bulbous, the succeeding volution low and angulated at the periphery, and the early whorls of the conch smooth and gently rounded. In the Maryland species, on the other hand, the earliest whorl is small and obtuse and the succeeding turn rather slender and gently convex, the sculpture is initiated very early on the conch, certainly not later than the third volution and in the form of two subequal spirals symmetrically spaced between the sutures. The differences both in the general aspect and in the details of the sculpture seem sufficiently great to demand the separation of the northern and the southern races. Since the Maryland form received Conrad's name, a new one must be given to the Florida shell.

The nuclear and early post-nuclear whorls of T. dalli have been lost. The earliest remaining whorls are high and narrow with an obscure carinal lira set about two-thirds the distance from the posterior to the anterior suture. In front of this slight keel, the whorl is feebly constricted. The second spiral to be introduced is that which revolves a little in front of the posterior suture. A third spiral is introduced during adolescence directly behind the anterior suture. On the adult whorls the sculpture is strong but rather simple. The carinal spiral of the juvenile whorls remains the strongest of the three and is crenated by the incrementals. The posterior spiral is usually double and less strongly crenate than that in front of it. Between them is a strongly concave medial area sculptured only with incrementals. The anterior spiral holds its position directly behind the suture and is overridden with fine lirae. The incrementals are sharp and sinuated; the axis of the sinus falls symmetrically on the concave area between the two strongest spirals. The sutures are deeply impressed. The base is broadly rounded and obscurely lirate. The aperture is subcircular and holostomous, the outer lip thin and sharp, not preserved entire. The inner margin is strongly concave, the parietal wash moderately heavy and widely spread, the pillar reinforced.

Turritella (Torcula) dalli is one of the earliest members of the group that includes the more ornate T. waltonensis from the Shoal River and T. guppyi Cossmann from the Bowden beds. The early whorls of the three species mentioned are very similar."