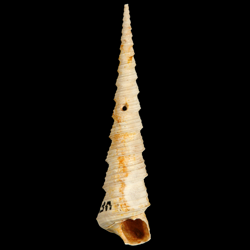 Shell thin, acute, with twenty-four sharply carinated sculptured whorls and a nucleus of two smooth, swollen whorls, of which the first is set obliquely to the axis of the adult shell; transverse sculpture only of lines of growth, which are not prominent and rarely undulate even the finest of the spirals; the periphery of the whorl is near the suture in front, and is ornamented with an extremely sharp keel, which overhangs, like eaves, the succeeding whorl; above this are four narrow less prominent keels or elevated spirals, with much wider about equal interspaces, which on the later whorls carry a fine intercalary spiral line; the surface is polished, but shows traces under the lens of microscopic spiral striae; in front of the main carina are one or two elevated spirals between it and the almost invisible suture; the base inside of the sutural line is distantly spirally sculptured and rather convex; the aperture is subquadrate, the pillar arched, thin, and twisted so as to offer a minutely pervious axis; the throat is provided with strong sharp lirae independent of the sculpture. Lon. of shell 77 ; max. diam. of base 17 mm.

[...]It occasionally happens that the main carina in T. subgrundifera is no larger than the others, in which case, of course, the whorls have a more rounded appearance. But these specimens are rare compared with the carinated, which seems to be the normal form. It is the only fossil species here referred to with sharp lirae in the throat; the others have the throat quite smooth except in cases where the sculpture is reflected by sulci in the interior of the aperture."