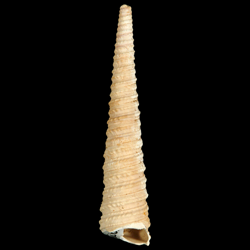 "Shell high, slender, porcelaneous in texture. Whorls increasing gradually in size, approximately 30 in the adult shell. Apical angle about 10°. Protoconch very small, smooth, paucispiral; initial half turn partially immersed; succeeding turns strongly inflated. Line of demarcation between conch and protoconch not distinct but probably within the second complete volution; indicated by the gradual establishment of a carina, at first medial but migrating toward the anterior portion of the whorl and gradually pinching into a prominent primary spiral, which on the later whorls revolves a little less than halfway between the median horizontal and the anterior suture; a second spiral introduced at a similar distance behind the median line, rapidly increasing in prominence until it equals that in front of it; minute riblets developed by the incrementals first on the posterior spiral, later on the anterior; a third primary spiral introduced directly behind the anterior suture at about the tenth or eleventh whorl but feebler than the two behind it and only slightly affected by the incrementals. Entire surface threaded with microscopically fine lirae, the medial threadlet becoming increasingly vigorous and at about the twentieth whorl minutely beaded by the growth lines; an additional spiral introduced in the adults directly behind the posterior primary and in some individuals merged with it. Normal adult sculpture thus consisting of two prominent tuberculate spirals symmetrically placed with respect to the sutures, the posterior commonly a little the heavier, separated from one another by a strongly concave area in which a finely crenulated lira revolves at or just in front of the median line; a prominent cord directly behind the anterior suture and a finer beaded lira directly behind the posterior spiral; the entire surface microscopically lirate, the threadlets most distinct on the elevated surfaces. Incrementals overriding the spirals and conspicuously crenulating all except the anterior spiral; strongly arcuate, thus producing a series of minute, protractive riblets on the anterior portion of the whorl and retractive riblets on the posterior portion. Suture lines distinct but inconspicuous. Periphery of body sharply outlined by the cord, which on the spire follows the posterior margin of the suture. Base in front of the keel slightly depressed, then elevated and arching feebly to the columella. Basal surface smooth except for vigorous incrementals. Aperture rudely quadrate, the outer lip rather heavy, obtusely angulated at the periphery. Columella lip evenly concave, reinforced. Parietal wall thinly glazed; throat lirate or nonlirate, the lirae when present corresponding in position to the interspirals on the exterior.

Turritella (Torcula) waltonensis is another ornate type exceedingly abundant in the Shoal River beds, particularly at the type locality. Though readily recognizable in the entirety of its characters, it is inconstant in details. The axial sculpture is much more prominent in some individuals than in others and in the gerontic stage tends to evanesce toward the aperture. The posterior spiral may be a fine, sharply beaded threadlet distinct from the primary in front of it, or it may be low and broad and more or less merged with the primary. The posterior primary may be equal to or less prominent than the anterior, though normally it is the more elevated. In the late whorls of old and large individuals the median spiral is obsolete.

The species is probably the ornate analog in the Walton County fauna of T. dalli of the Chipola beds. In T. dalli the axial sculpture is very feeble, although the primaries, particularly that in front of the median line, may be obscurely crenulated. The spiral directly behind the suture is relatively stronger in the Chipola form and more similar in character to the primary behind it. The median spiral is not developed, and the fine posterior spiral is not so distinct as that of T. waltonensis. T. dalli is on the whole a larger, less slender, and much heavier form, with a more strongly serrate profile."