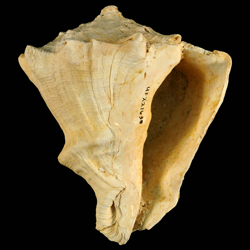 This form is perhaps the ancestor of V. cestus Brod. and V. muricatum Born. V. haitensis Sowerby is closely related; it resembles V. engonatum in the flatness of the spire for the last three or four whorls, but was referred by Gabb to a variety of muricatum, which other details indicate not to be the case. V. haitensis has fewer spines and a more elevated and acute apex than the form now under consideration.

V. engonatum differs from V. muricatum when adult in having the suture appressed closely to the angle of the preceding whorl; in its less prominent apex; in its finer and much more numerous spirals; in its larger, more prominent and conical spines, which are less by one or two in number, on the angle of the last whorl; in its single series of very large and conical spines anteriorly (cestus, muricatum, and haitense have two or even three series); in its more prominent siphonal fasciole enclosing a larger umbilical depression; and in its broader pillar and more triangular form. In V. cestus the spines are blunter and the spirals still coarser than in V. muricatum. Alt. of shell 96.0; diameter about 94.0; alt. of aperture 80.0 mm. There are three or four plaits on the pillar, the posterior plait much larger than the others.

V. tuberculatum Gabb is a remarkable form, with few enormous spines, bearing much such a relation to haitense as haitense does to the present variety. Without a connecting series I should hesitate to consolidate them, as Guppy has done"