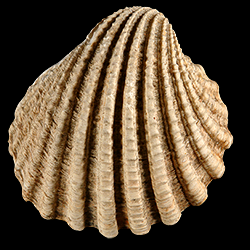 This species was originally figured in Dall (1900) as Cardita (sp.), without a written description.

Shell robust, large, convex, with full, prosogyrate beaks which completely conceal the lunule and are situated at the anterior fourth of the valve; hingeline horizontal, the dorsal margin slightly arched over it, the anterior end produced near the hinge-line, rounded, and then curved obliquely towards the lower posterior end of the valve; posterior end very bluntly rounded, almost at right angles to the hinge-line; sculpture of about twenty strong, broad, slightly rounded, flattish ribs, crossed by narrow, sharp, low imbrications with their short slopes on the dorsal side, separated by somewhat narrower channelled interspaces, the whole crossed by rather irregular, coarse, concentric striations; in the young the ribs are relatively narrower, higher, and more regularly and distantly imbricate; hinge normal, the hinge-plate narrower than in V. hadra, the inner margins heavily and deeply fluted. Length 53, height 46, diameter 37 mm.

This fine species externally has a good deal the look of V. hadra, but on looking at the inner face of an adult valve we see that the beaks in the latter are more anterior, the hinge-line broader and more arched, the lunule exposed, and the outline of the disk, omitting the beaks, is nearly a regular oval, while in V. himerta the form is more nearly rounded trigonal, more abrupt behind and more produced just in front of the beaks. The latter species also attains a larger size."